​The Haunted One® – Paranormal Theatre 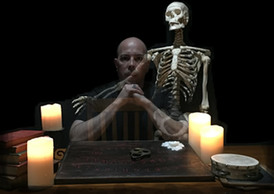 Brahm Corstanje was featured at last year's ECSS II opening night performance, where he presented Asylum Hauntings.  He returns to ECSS III to present The Séance.

Brahm has had a fascination with ghostly tales and the prestidigitational arts for over 35 years. Some of his bizarre presentations have been featured in Mary Tomich's The Altar Flame.

His interest in live theatre began when he applied his conjuring skills to create special effects for his high school's production of Dracula. He has since become very involved in local community theatre, including holding board member positions for both the Lebanon Theatre Company and Acting Up. He has appeared in several community theatre productions, including Crimes of the Heart, 12 Angry Jurors, A Christmas Chaos, You Can't Take it With You, Taking Steps, Little Mary Sunshine, See How They Run, The Octette Bridge Club, and A Thousand Clowns. He has also directed youth cast productions of Footloose the Musical, Grease, and Charlotte's Web.

Brahm provided award winning magic consulting for several local community theatre productions, including: Pippin, Once on this Island, Disney's Alice in Wonderland Jr., The Wizard of Oz, and The Addams Family.

He is a member of the International Brotherhood of Magicians (Order of Merlin) and the Society of American Magicians.

A patent attorney by trade, Brahm can also be seen weekdays performing as counsel on a wide variety of complex licensing matters at The Procter & Gamble Company.

séance | ˈsāˌäns |
noun
a meeting at which people attempt to make contact with the dead, especially through the agency of a medium.
On Saturday night, Brahm  will present The Séance  as one of the ECSS III "Midnight Séance" sessions. Brahm will lead 6-8 ECSS III attendees as sitters. These sitters  will directly participate in The Séance performance, as the remaining attendees observe the proceedings. The sitters will attempt to uncover clues revealed by the books, papers, photos, and an old cassette recording that belonged to a preacher. Some of the preacher's sermons are hauntingly preserved on the deteriorated audio cassette...a recording that may serve as a bridge to the spirit world....